All Posts in Uncategorized

Smart Alien is an educational tool designed to teach children about space. Children start learning about earth and the solar system as early as Key stage level one and now we have developed an app that will make your children just that more interested in about the universe we live in.

With Smart Alien you can jump into your rocket ship and travel through space looking at all the different planets in our solar system, teaching you about the distances, ages, size’s, obit time and giving you fun facts about each planet. As you use your directional buttons to fly round the solar system you can get close up and personal with each planet, or zoom far off into the distance and see how beautiful our universe really is.

Our target audience for Smart Alien are children learning at key stage level 1 aged between five to seven years old. We have made sure to include in our app what children are learning at this stage in their life about space. We realise that this age is one of the most important in the development of a child’s brain. We wanted to make the subject of space as interesting as possible for them. While researching about the solar system [1]at key stage one level we know that a student should be learning about the different planets, the orbit time, the distances which you can all find in our application.

During our research, we found that there has been a growth in children using mobile devices and playing games on tablets and computers. [2] Studies show that 20 percent of one-year-olds have their own tablet computer and 28 percent of two-year-olds can navigate a mobile device without help. We felt with the growing pace of technology that would be a good idea to start trying to create more educational programmes for children to use on their computer/tablets so they could use it for revision and study.

We consider our audience in our design by making the program very easy to use with a simple layout for educational purposes.

When we began the creative process, we had a starting point. That starting point was including WebGL in our project. We had to gain an understanding of the way WebGL works with P5js as it works completely differently in contrast with the regular P5 library.

We played around with primitive shapes such as boxes and spheres (as opposed to rect’s and ellipse’s) and when we felt comfortable with the library, we moved onto the next step.

Our original idea was to create a program which gives the user an Autonomous Sensory Meridian Response (ASMR) to what is being viewed on the screen. ASMR is that feeling you get occasionally when, for example, you get a shivering / tingling sensation going down your spine when you hear particular sounds / see particular visuals. [These can include people whispering, the sound of scrunching paper, etc.

Here is an example of a video designed to give you an ASM Response:

The intention was to tie in the feeling of floating in space into the ASMR program we were creating.

To do this we first created a sphere, which going to be a planet. We applied a texture of planet earth to the sphere. The next step was to create stars to make it look like the sphere is in space. We achieved this by making a constructor function to create a small sphere at a random location. This constructor function was then called in a loop which runs 1000 times, and every time pushes a new Star into an array of Stars. This worked extremely well, as we now had 1000 stars at random locations. We then wanted to apply movement to the 3D space we had created. We achieved this by rotating everything using Perlin Noise. This gives a free flowing feel to the movement of the rotation, as well as it being random.

For this to work as intended, we would have needed to set it up as an installation in a large, empty, black room with no light in it. The visuals of the program would then be projected onto one of the walls, while the sound was played loudly through speakers. We could not, however, achieve this as we needed to hire a large room, and a lot of equipment.

This is where we changed our idea. We stuck with the solar system frame for the program, but changed the basis to be an interactive, educational program to be used in schools to teach children about the solar system.

We began by adding more planets into the program using a constructor function which we called with specific locations and sizes and spacing them apart from each other, and applying textures to them. One problem we encountered was the stars which we had originally created were now moving through some of the planets. This did not look realistic, so we made the stars significantly smaller than the originals, and also created a giant box to go around the whole of the solar system. We applied a star texture to the box, which gave the desired effect of our solar system being part of a bigger solar system.

One problem we encountered here was that of how to include restrictions to prevent the user from moving the camera past a certain point. I.E. preventing the user from being able to zoom through the planets, and outside of the box surrounding the universe.

We achieved this by using a series of if statements. Here is an example:

Next we needed to create a way of displaying the planets information including name, size, distance from the sun, and orbit time. This required researching into planetary facts. This was done by creating an extremely thin box then applying a custom texture to the box which we created in Adobe Photoshop. This worked perfectly. 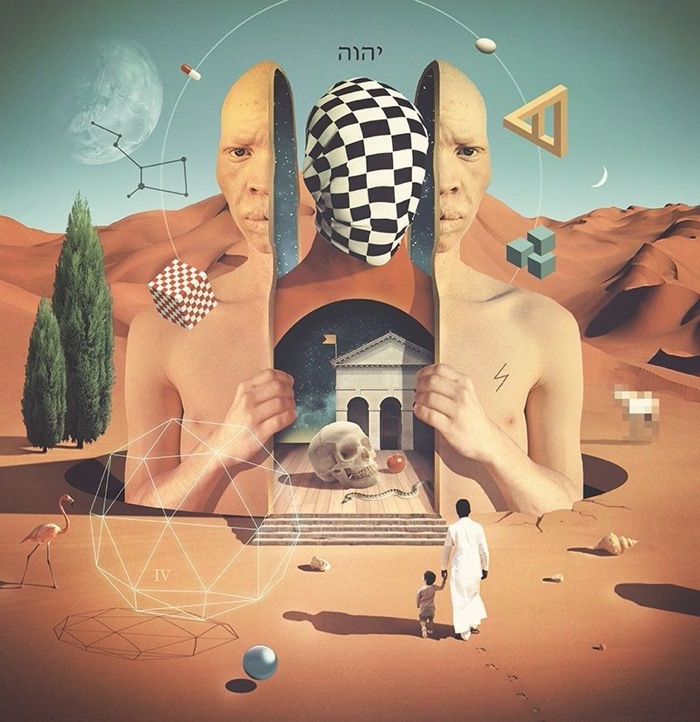 This post is an exploration of the Surrealism movement through both traditional and contemporary mediums. In exploring this topic, we have aimed to develop the aesthetics for a three dimensional virtual environment that is both navigational and manipulatable by the user's choice of audio input.

The flow of our creative research began by wanting to look at how aspects of nature are visually incorporated into technology however we realised that this is a very broad subject. From this we quickly found ourselves onto the topic of art movements that take worldly subjects and how they visually convey these matters, which in turn led us to the movement of Surrealism specifically.

As a brief introduction to Surrealism, it is a movement that developed from Dadaism [1] in the early 1920s. Dadaism itself is a movement which emerged during the First World War in an attempt to restructure social order after the destruction caused by the technological advances in weaponry, communications, and transportation systems. Surrealism stems from this approach and aims to express the creativity of the unconscious self in its own illogical manic way and also to force you to question reality and the potential of the unconscious mind through various mediums.

Yves Tanguy was a Surrealist painter in the early twentieth century who referenced artists such as Salvador Dali and Mark Rothko. He is best known for his abstract biomorphic shapes and paints hyper-realistic worlds. His work reflects his obsession with childhood memory, dreams, hallucinations, and psychotic episodes and as a result his landscapes become a blend of fact and fiction. Objects hover in midair or drift towards the sky. His manipulation of perspective of keen observations of the natural world contributes to the hallucinatory effect he creates in his work. 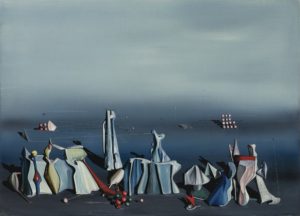 Smith takes reference from both Surrealist and Impressionist movements. He attempts to capture feelings and experiences through his work by creating life-sized pieces so that he feels that he can be connected with the world he is creating.
David Brian Smith has a farming background and from this he creates an autobiographical link to his work. This series of his work is based off of a singular photo that his mother showed him of a shepherd tending to a flock in a newspaper from the 1930s, and for each piece he states that he "reinvents the space, light, and palette within the picture"[2] to create a drastically different interpretation.

Another way he incorporates a surrealistic approach is through the use of recursion in the landscapes. However he includes a primary solitary figure, which is the shepherd and the dog in this series of work, to become the focal point of the piece. His use of colours consists of superimposing three primary colours to produce a final print. 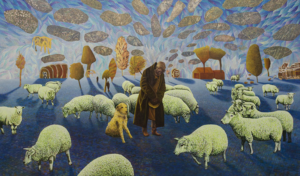 Hans Henningkorb's piece, "The Score" [3], consists of a virtual space that interacts with the user's behaviour in a one-to-one experience. There is a complex musical logic that is described by four individual systems that generate an orchestral piece of microtonal clusters. Microtones are intervals that are smaller than semitones that are not commonly used in Western tuning which features twelve equal intervals per octave. The piece characterises and understands the instrumentation of this musical system as a huge virtual two-dimensional environment as sound-colours, systems, and dynamics. With a dextrous use of colour and shapes, Henningkorb creates visuals that are simultaneously realistic and unearthly through the depiction of intricate textures and great depth. Through the systems circuitous relationship, it has given us the idea to develop a somewhat esoteric and hyper-realistic environment that translates and interprets audio data in an ambiguous manner.

SVBLM [4] is a group that specialise in creating small browser-based games using Unity. The Bends is a walking simulation with its environment as a small valley in which you can wander. Throughout the valley there are large black pillars that you can walk to and "select", when selecting a pillar it adds a layer to a song that is synchronised to a preset time phrase. Walking away from a selected pillar makes the corresponding sound seem further away which gives us a sense of depth through elements other than the visuals. This virtual environment seemed to bring forth a feeling of alienation and a solitary existence, which is something we would like to recreate. 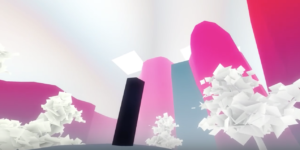 These are imaginary environments that the audience can move seamlessly between using a standard video game controller to explore and manipulate their surroundings. It combines interactive video projections with 2D works on canvas, using multiple screens periodically placed among several 2D paintings. The idea is to create an all-encompassing environment in which the audience becomes completely immersed in this dystopian mechanical world. The installation takes place usually within a twenty by twenty foot enclosed cube with projections and digital paintings covering all six walls. This environment explores some of the fundamental concepts of Dadaism by focusing on the consequences caused by abuse of technology and social advancements.

All of the projects above incorporate properties of surrealism that we wish to absorb into the aesthetics of our project in some way. From the element of recursion featured in Smith's, SVBLM's and HeyApathy's work to the abstract biomorphic shapes present in Tanguy's pieces. We hope to be able to create a visually stimulating three-dimensional world that pays homage to surrealism's testimony.

Welcome to WordPress. This is your first post. Edit or delete it, then start writing!