Adventure games are a wide and varied genre filled with many different titles and many different types of mechanics. One main feature of adventure games is world exploration. And the specific mechanic that we focused in on as a group was the use of text and prose as a narrative device. In our studies we also looked at Ryoji Ikeda an audiovisual artist as part of our aesthetic research.

EXAMPLES OF NOVEL, TEXT BASED GAMES

DIGITAL is a visual novel or interactive fiction game. This game is played using text. The user plays as the protagonist who has just purchased a computer. The game is displayed as a computer from the late 80's, in which the player can then check their emails and messages to the point where the mysterious love story begins when they come across a phone number.

With notions of love, enigma and intensity, this specific game is very engaging, the plot consists of the player sending emails and messages to an unknown person leading to a smart twist at the end. The games mechanics help draw the player into the narrative through " roughly simulating a system that we’re aware of, we gain information – and so create an internal narrative – in the same way we would do in real life."[1]. This creates a sense of verisimilitude which helps to ground the fantasy of the game within our reality. 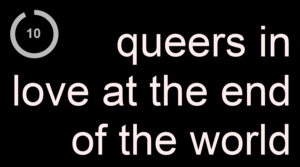 Queers in Love at the end of the world is a very unique game we came across during our creative research. This is a simple text based game with a very intense twist. The player is given 10 seconds to decipher the fate of these two lovers. The game requires speed and wit, where the players choice of decisions can alter the environment of this fictional world. The speed of the game is it's interesting trait as it keeps the player on the edge of their seat. We thoroughly enjoyed playing this game multiple times to see what the different endings were.

"A DARK ROOM" by Michal Townsend

A Dark Room is a long, standardly structured, web based text game. It requires a lot of patience from the player with the slow start and a lot of waiting, however it gradually builds up to an intense and vigorous plot. The player starts of in a fire lit room where they can stoke the fire. This then leads to the player gathering wood, to build huts which entice visitors and can ultimately lead to creating a village. The fictional world has beasts and fires break out, killing residents and the user has to patch things up and get to the bottom of the attacks by beasts.

It is a very addictive game, keeping the user to consistently commit an action (gathering wood, checking traps etc). It possesses the common text game trait of the player having the power to change the environment and ending. It has an almost never ending plot and can get very stressful at some points nevertheless it is a great example of a game we wish to somehow implement to our idea.

"With Those We Love Alive" by Porpentine

With Those we Love alive is a solemn, ambiguous game seen through the themes of love, and despair. The structure and length of this game, alongside A Dark Room are very alike with the patient pauses and extensive storyline. The player is allocated a career path based on their birth month and the element they feel represents them. The story is very vivid, using sounds and soft colours to give it a calming ambience. The most interesting innovation that this game makes is in asking the player to do a "particularly-intimate task: to draw symbols on your own skin while playing."[2]. This aspect of the game helps to ground it in the real world which makes it very intimate for the player and creates a physical connection between the player and the game.

Ryoji Ikeda is a Japanese Audio Visual artist that we have taken an interest towards. He is an artist who plays with auditory perception by using high frequencies on the edge of human hearing to keep people on edge. He is meticulous with editing, and often likes to use simplistic monochrome visuals to keep focus on sound. We looked at two of his pieces, The Transfinite and Infosphere which display strobe lighting and and rapid, hasty transitions.

He creates jittery and tech sounds with harsh, abrupt visuals which have the viewers immediately drawn to his work which often taps into a "primitive sensation, obliterating the potential for alienation by appealing to the most instinctive means of bodily connection."[3] . Ikeda is very good at tapping into the primal side of technology through use of sound and visuals.

LSD by by Asmik Ace Entertainment

This game was created for the Play Station 1 in 1998. On the surface the game seems to reference drug use due to its title, but looking at the games content there is no reference to drugs and instead it is very much an exploration of the subconscious. It is known for it's saturated colours, eccentric nature and random encounters which change on every play of the game. We were drawn to this game because the visuals stood out to us as a weird, psychedelic world.

In the game the textures get progressively more creepy and absurd the more you play and there are many randomised encounters which provide a large difference in kind in subsequent playthroughs. The underlying game mechanics are kept secret from the player which makes every new discovery more impactful  "I’ve been playing for a week and I feel like I don’t know the first thing about how this game works and the mystery of it is perhaps the most rewarding part."[4]. This makes the game more personal and user generated as every player's experience of the dreamscape will be different.

Interacting and exploring worlds are something that interactive media such as games are very good at doing, and all of these examples minus the Ryoji Ikeda case study are examples of this. Meticulously choreographed linear media experiences have their time and place but giving the audience control of the experience (or the illusion of control), can create a more memorable and intimate experience.